IN PRAISE OF PROMISCUOUS CULTURES

Part 1: The Roots of Edible Landscaping and Forest Gardening in the Mediterranean

This is the first installment in a series examining the practices of agroecology, edible landscaping and forest gardening that underpin many aspects of perennial polyculture design at La Donaira. We begin with an examination of the historical basis in the traditional farming practices of the Mediterranean, many of which involved multiple social, agricultural and ecological benefits. 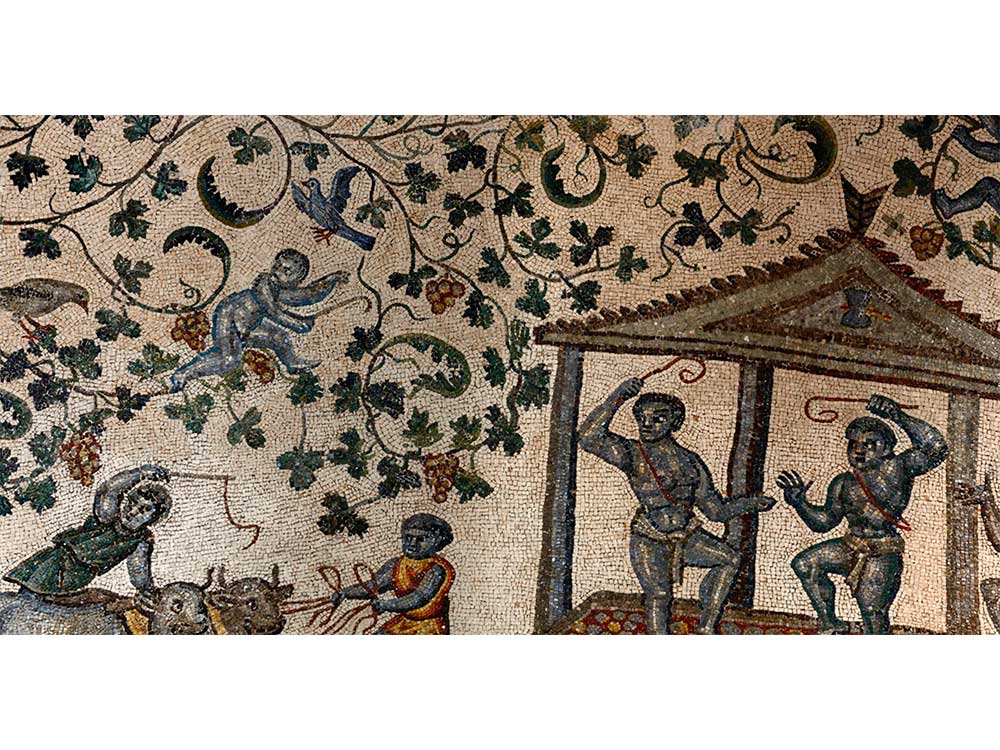 “At the shade of a proud palm tree an olive tree sprouts, and under the olive tree, the fig and the pomegranate, and under that the grape. Under the grape the wheat, and then the leguminous. At last, the leafy greens. All that in the same year, and each one of them being fed at the shade of the other.”

What many today consider a timeless rural landscape – the vineyard whose neat shows trace the curves of a Tuscan hill, the waves of grain that run across the Tiber River valley, or the regimented rows of olive monocultures sprawling across parched Iberian plains – are anything but ageless. Indeed, they are an extremely recent invention.

Edible landscaping, agroecology and forest gardening – the creation of productive environments conducive to human delectation and recreation that mimic the relationships, resilience, diversity, and dynamic processes of natural ecosystems – are modern phrases for practices stretching back into earliest antiquity. Eden, Shangdu, the hanging gardens of Babylon, the floating gardens of Xochimilco, are all superlative examples of edible landscaping.

The grape, the grain and the olive: with these primary colours as the basis of their palette, the diverse cuisines that constitute the Mediterranean diet have painted their faded frescoes, their titanic arabesques and their rustic vignettes across the canvas of fifty centuries. Yet the earliest historical records mentioning these crops, such as the Old Testament, often puzzle modern readers by the use of the term “vineyard” to denote a parcel of ground in which olive trees are planted. Based on textual and pictorial evidence, it is reasonable to conclude that in the ancient Near East, olive trees were planted amid grapevines.

In the Mishnah we read that the rabbis of two thousand years ago argued about what else besides olives could be planted in a vineyard without breaking “the law of diverse kinds”. Most agreed that vegetables, grains, and flowers could be planted in a vineyard, provided there was adequate spacing between the various species. They also discussed the question of training vines over non-fruit trees and fruit trees, and both the olive and fig tree are mentioned. A mosaic depicting a grape vine trellised onto the Tree of Life, discovered in the ruins of one of the oldest known synagogues, further attests to the long-lived prominence of forest gardening in the Middle Eastern regions of the Mediterranean basin.

On the other hand, throughout the European part of the Mediterranean – an area stretching from Greece through Italy, France and Spain, the coltura promiscua or coltura mista (translated as “promiscuous agriculture”, polyculture or mixed farming) landscapes predominated in many regions.

These were mosaics of mixed cultures on terraces, and are prominently depicted on paintings from the middle ages onwards, but were first developed by the indigenous Etruscans of central Italy three thousand two hundred years ago, well before the rise of the Roman empire. Like many native peoples, when they first began to cultivate vines the Etruscans did so in the same manner that they saw these plants grow wild in the woods (interestingly, a recent study on the origins of domestication suggests that the first cultivation of cereal monocultures in the fertile crescent was likewise inspired by the natural ecology of wild grains). The grape vine, vitus vinifera, is a climbing shrub, a species of liana. In a woodland, its natural habitat, it tends to climb up a tree to reach as much light as possible above the underbrush (it is a very light-loving plant). However, it is not a parasite: the vine does not weaken the tree on which it clings. The practice of growing trees as a living trellis for grape vines came to be known as “vite maritata”: married vine. Originally the vines were not pruned, later they were subject to long pruning. The grapes therefore tended to grow vigorously with very long shoots that were woven into intricate patterns festooned between the trunks of their support trees, or draped from crown to crown forming a solid green wall several stories high – the original “vertical gardening”. Farmers harvested the grapes with the hands or with sickles, with ladders or using instruments with a very long handle. 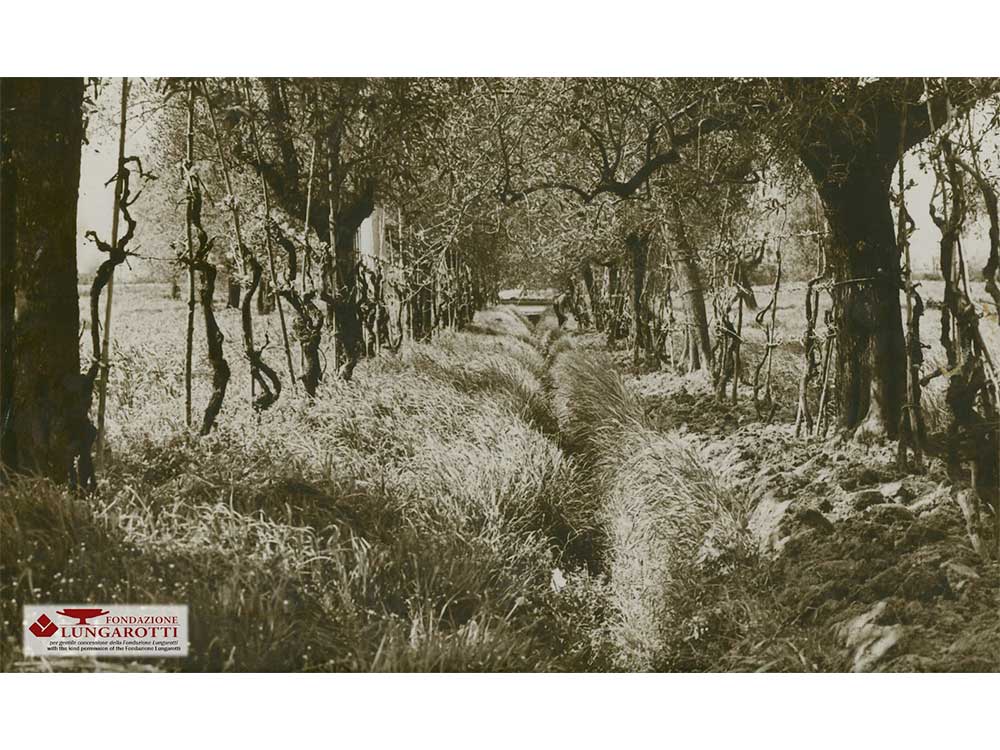 Thus, the evidence suggests that domestication of grapes, which occurred independently in central Asia around the foothills of the Caucasus (from whence it spread to the Middle East and Greece) and again in central western Italy, was on both occasions developed in the context of a sophisticated indigenous polyculture.

Over time these evolved into landscapes with promiscuous cultures of tree crops (including olive, maple, elm, almond, walnut, poplar, as well as various fruit trees such as fig, mulberry, and pomegranate) “married” to grapevines.  The trees, planted sparsely and pruned heavily so as not to shade the crops planted below, also provided leaves for animal forage, as well as fuel in the form of cuttings from the yearly coppicing (or, more accurately, pollarding). Between the rows of support trees and grapevines, a practice known in modern agroforestry parlance as “alley cropping” flourished, wherein companion plants, either perennials or annuals such as grains, vegetables, pasture, aromatic herbs, flowers, and legumes were planted in rotation, the latter of which provided nitrogen fixation and improved soil fertility. Two- or three-course rotations were most common, such as alfalfa-wheat (every fourth year), or rapid short-season rotations such as millet-lupine-turnip sown three times a year. Post-harvest stubble-grazing by sheep and goats, combined with mulching and controlled burning, completed the holistically managed regime. Thus, fertility was regenerated through animal integration and closed loop nutrient cycling.

These landscapes always had extensive transportation networks that connected fields, pastures, forests and settlements and enabled the spatial interrelations through the transport of livestock, yields, manure and other means of production. There was a more or less stable means of sustenance: drought might kill off winter wheat but hardier olives and grapes would survive, and farm animals could always be fed on a combination of leaf-forage and other forage gathered from the woods. The polyculture did not end strictly at the confines of the field, as rural people had (and continue to have) intimate knowledge of wild edibles. The forest was simply a less-ordered part of the coltura promiscua. Indeed, alongside the tree crops of the terraces, grazed nut tree stands of mo