HOW TO GENTLE A NEWBORN HORSE

Whilst most westerners talk about “breaking” a horse to describe the process of training it for work with humans, Native Americans described the same process as “gentling” it: reflecting a world of difference between an attitude aimed at creating naturally responsive, rather than merely submissive, equestrian partners. In the same spirit, our natural horsemanship team describes the first steps of our own approach for developing a working relationship with these naturally gentle creatures.

The first human contact with a newborn foal is decisive. The way the handler connects with the foal will determine the horse’s future behaviour with humans. At La Donaira, we do it cautiously following natural horsemanship principles.
In nature, horses are prey animals and therefore have a natural fear of pretty much everything, humans included. The objective of our first handling sessions with the newborn foals is therefore to extract that fear and create a bond of trust.
Newborn foals look quite fragile but they are actually very strong. Before the foal understands that he’s physically stronger than you, there is quite a lot of work to be done. It is crucial that the handler establishes his status as the leader in the relationship with the foal. No biting, kicking or running into humans. The foal should always respect the handler and his space.
Every horse has its own character, which makes every training session different. In fact, we can already see a big difference between the first two foals of this year. The first one is dominant and playful, while the other is rather shy and stays closer to his mom. In any case, throughout their training, the foals have to respect the leader like they would do naturally in the herd.
The very first handlings are done in the stable with the mother close by to keep the newborn foal relaxed. These early sessions are all about getting the foal used to being approached by humans. In order to do so, the handler slowly approaches the foal from the centre of his body (to prevent the foal from going backward or forward), and then backs off to demonstrate that he means no harm. The process is repeated each time a little closer to the foal, until the handler is finally able to touch him.
Once the foal is confortable with the idea of being touched by a human, we can start working on familiarizing him with the halter. The halter, or foal slip in this case, is a simple but powerful tool to teach a newborn foal how to give in to pressure. This is simply done by leaving a lead rope dangling from the halter. When the foal steps on the rope, he feels the pressure of the halter behind his ears and naturally learns that lowering his head is the only way to release this pressure. This is his first lesson of giving in to pressure. It is only once the foal has learned that mechanism that we can teach him to lead. This starts with the face up lesson. The handler, who is facing the foal, gently pulls the lead rope towards him by applying a constant pressure. The pressure is released immediately after the foal gives in to the pressure and takes a step forward. It is very important not to talk while applying pressure so that the foal doesn’t associate the unpleasant feeling of pressure with humans. Conversely, as soon as the foal gives in to the pressure, the handler uses a soothing sound like “good boy/girl” so that the foal perceives the human as their pressure reliever.
In a nutshell, the early handlings are about reinforcing the idea that humans are friends, not foes. Because the right contact from birth ensures a confident young horse. 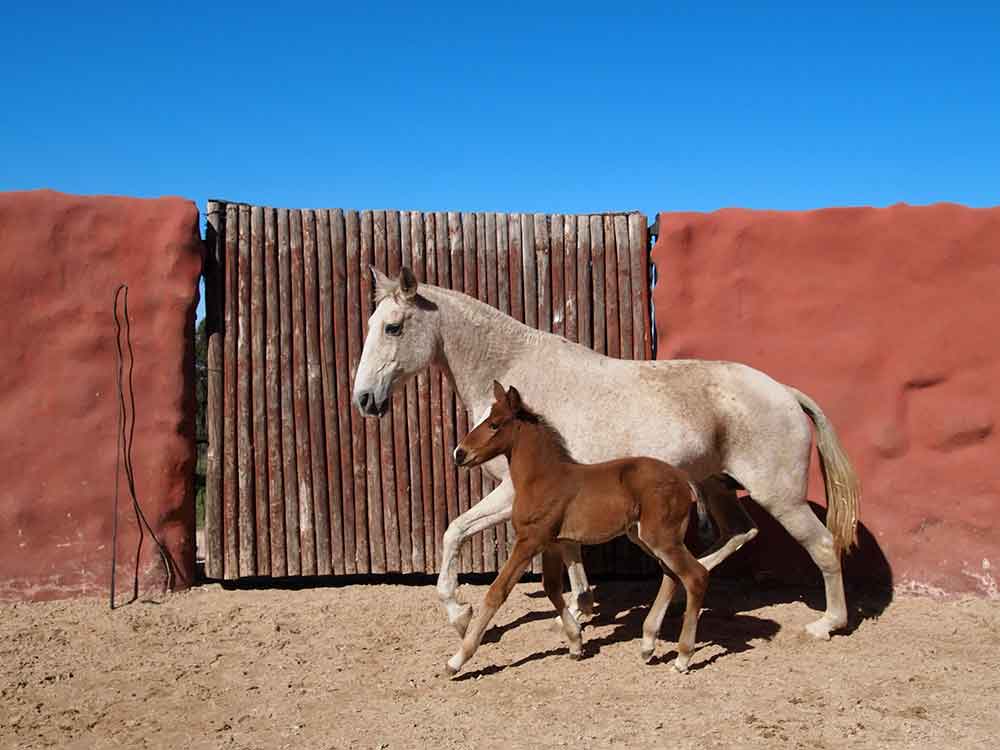 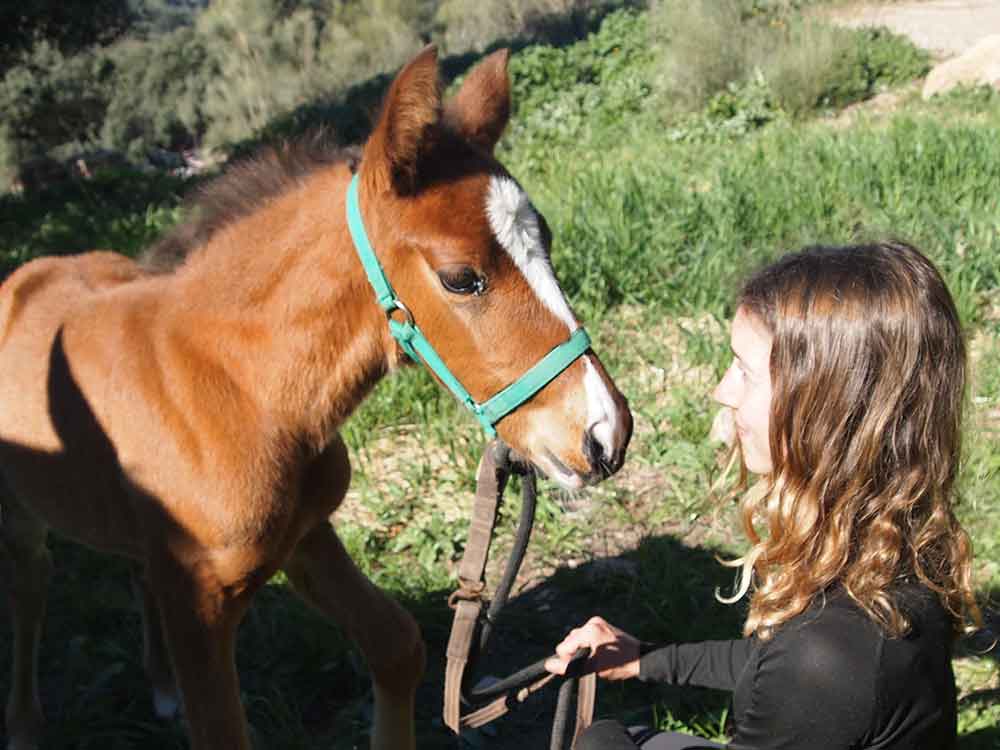 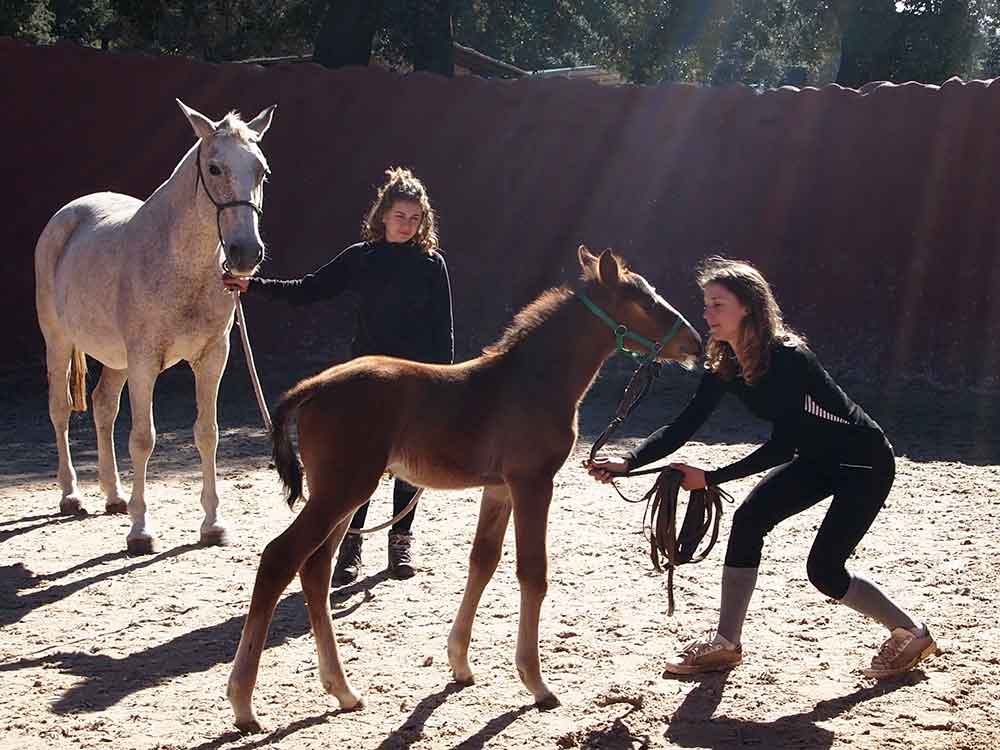 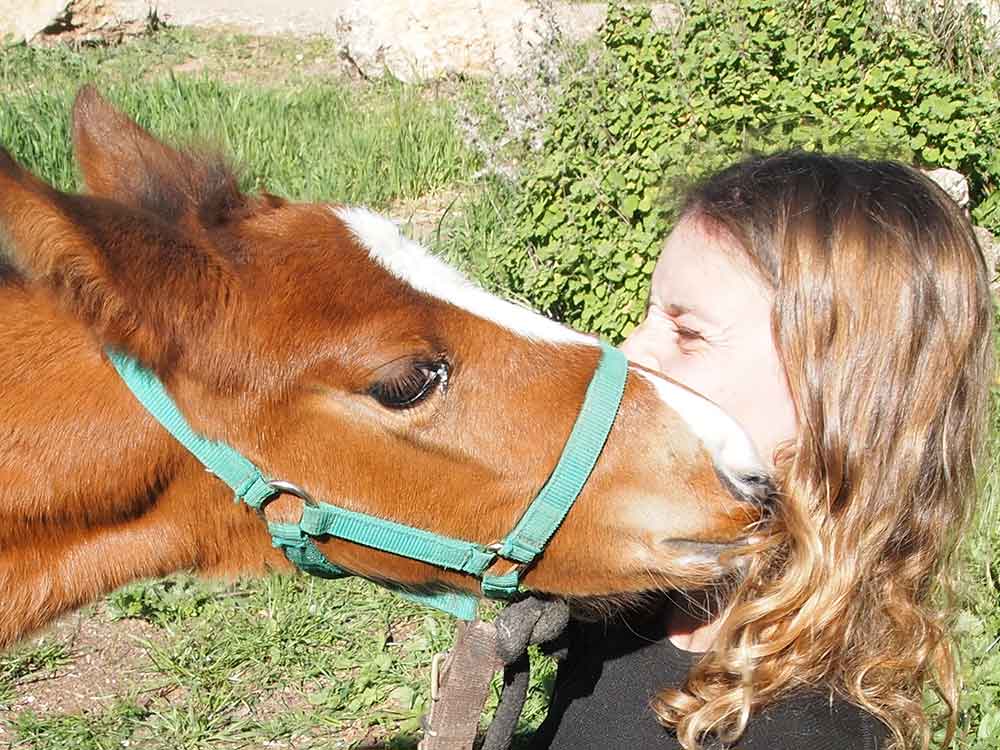