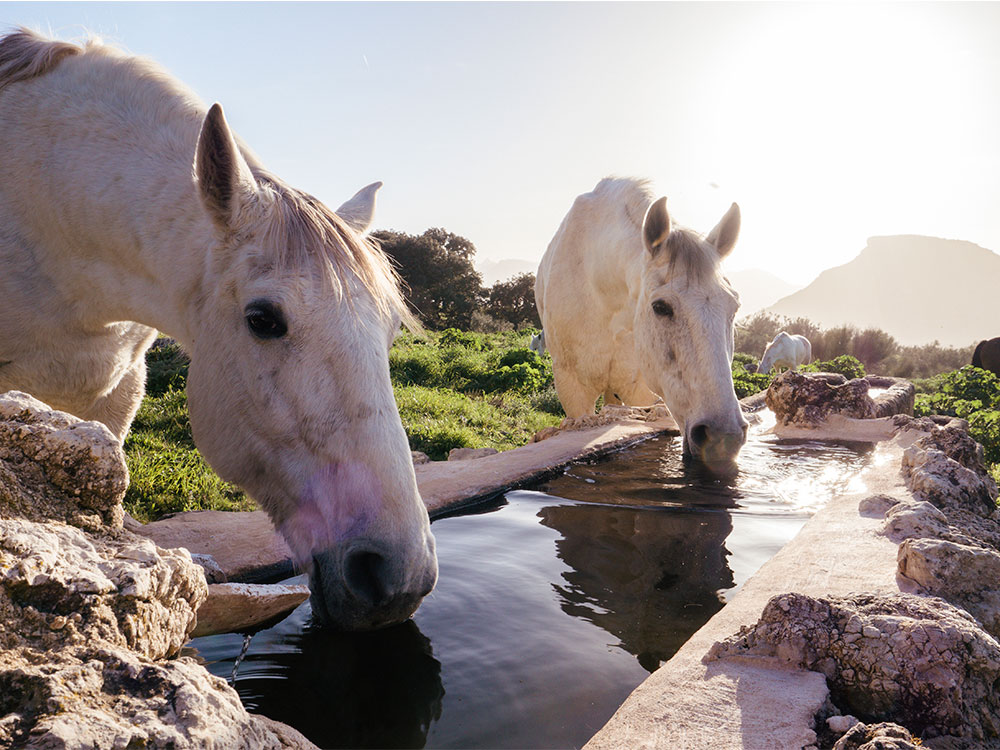 With the arrival of Spring, we celebrate the new springs that have sprung up all across the land. Over the course of the last two years at La Donaira, 8 springs have been either resurrected or built anew. Some of them collapsed from dereliction, some dried up from mismanagement, and some are the result of completely new spring-lines that have formed from regeneration of the water cycle.

On the farm our springs are channelled into beautiful stone water features called abrevaderos, or abreuvoirs in English: a mixture between a watering trough and a fountain intended to provide humans and/or animals with fresh drinking water.  In pre-automobile era cities, they were built as equestrian refreshment stations for horses providing transportation. In contemporary times, abreuvoirs are also seen in many Spanish villages and cities as civic or private fountains in the designed townscape-landscape. Often the antiquity of these water features is considerable, and it is estimated that the origins of our oldest abrevaderos at La Donaira reach back into Roman, Visigoth or Moorish times.

The physical process of restoring a spring consists of repairing the stone walls of the well underneath it, digging down to the lowest point of the waterline during summer, and repairing the above-ground masonry of the basins. But stonework is only one part of the story. All too often, soils are degraded by ploughing, chemicals, and over-grazing, transforming the structure into a dead, compacted, impermeable wasteland incapable of absorbing any significant amount of rainfall. These are some of the primary reasons why springs and wells run dry. On the other hand, through careful stewardship, even such degraded lands can be regenerated.

The ecological process of restoring a spring (or creating a new one) consists of managing the land carefully so that “the soil-carbon sponge” can infiltrate and store more and more rainwater, which slowly trickles down to the phreatic zone – the area in an aquifer below the water table in which relatively all pores and fractures are saturated with water. As the aquifer becomes recharged with increasing amounts of precipitation each rainy season, the underground lakes and rivers grow and grow until they spontaneously begin to overflow. In areas where the water table is highest, this process results in the eruption of old and new springs and the restoration of dried-up watercourses.

The sponge-like structure of healthy soils is created by the living food-web of plants, insects, animals, fungi and microorganisms that work constantly to build up and breakdown material underground in endless cycles of growth and decomposition. All this life is maintained by a constant cover of diverse vegetation with deep-rooted perennial grasses, herbs and trees which both provide a protective shelter from the elements as well as a permanent solar energy supply via photosynthesis.  The restoration of the springs is thus a story that reaches all the way from the obscure belly of the earth up and out into the furore at the core of the sun.