Home / FROM BEEKEEPER TO BEELOVER - AN INTERVIEW WITH JONATHAN POWELL, PART 3

FROM BEEKEEPER TO BEELOVER – AN INTERVIEW WITH JONATHAN POWELL, PART 3 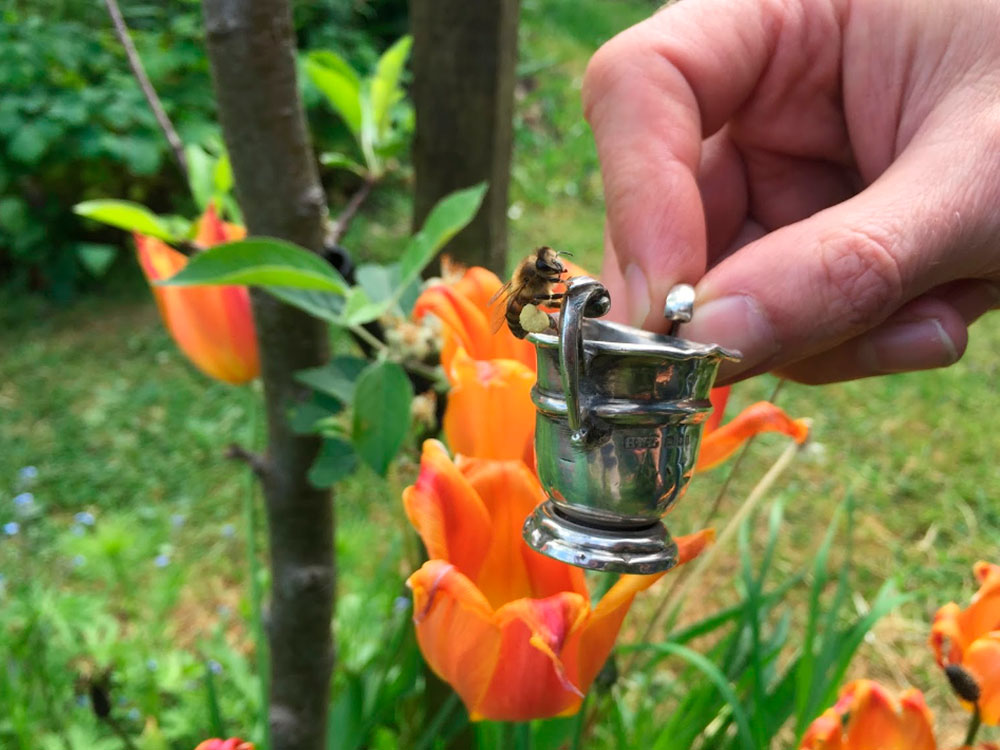 In this third instalment of our dialogue, we discuss the influences that inspired Jonathan to transition from beekeeper to beelover. As a preface, we begin with a story regarding the prize cup referred to in the interview that was elaborated off the record.

In 1930 my Grandfather won a prestigious silver cup for his honey at the annual London Honey Show held at the Crystal Palace. A year later he returned the cup and was given this tiny silver replica cup. As a child I remember the cup lived on the shelf by the stairs, my eye was always drawn to it as I ran up and down the stairs. After he died his oldest surviving son, my uncle, looked after and cherished the cup. I was showing my uncle and his sister my bees this weekend, and I was stressing how I do not keep bees for honey. Only if we love bees and all nature, not just value it, will we protect it. My uncle reached into his pocket for something, and then pressed it into my hand, saying as he did this “Dad would have wanted you to have this.” It was the cup. Just as I was admiring the cup, reflecting on how it has been loved and protected for over 86 years, a bee landed on it!

How did you make that transition from a bee keeper to a bee person? You are now motivated by the love of bees and it´s not even about getting the honey anymore, so talk a bit about that.

Definitely not about the honey. I was taught beekeeping by my grandfather, and my grandfather was doing beekeeping in the 1920s. In 1921 he won the world cup for honey and he got a big silver cup which later was replaced, the following year with this little tiny cup. There were always bees around and he taught how to do beekeeping at the time. The whole thing was,  being a child I didn´t have much pocket money so we would make as much honey as we could so we could take it to the shop and make some money. We would make the hives out of old wardrobes and furniture because I had no money to make the hives, so that was how it went. And then, just before I went away to university, we started getting much more aggressive chemicals in agriculture, and the bees were destroyed by the chemicals. You would just see mounds of bees in front of the hives, they were rising in agony from the pesticides that were put on the crops.

Not DDT, unfortunately DDT had been banned by then. It was whatever had replaced DDT. The chemical industry always tells you “If you ban this, we will have to use something worse.”  My reaction to that rather simple argument is: “Well, ban that worse thing as well.” What are you thinking? That is not an argument!

So it was a sad ending to the bees, and then I went through life and I came back into it. What had happened in the meantime is that we now had this tiny little mite called verroa, which had been spread by the human transportation of bees. It had come across from the asian genotype of bee into the apis millifera bee that we know, and then rapidly spread across the world. Because of transportation, because of the way modern beekeeping is going, where bees can be sent in a package from one country to another, things spread through nature at an incredible speed. There is no time for them to adapt and survive these things. The speed of change (this is the problem with climate change), is so enormous, so fast. When I came back into beekeeping, beekeepers were now dealing with verroa. The first thing that happened was to look for a silver bullet, a technological solution, and so they put in pesticides into the hives to kill the mites (and hopefully not kill the bees!), and they put in acid-wash where they burn the hairs of this mites (which also incidentally burns the hairs of off the bees), and I was shocked. So I thought there´s got to be a different way of doing beekeeping because I dont want to redo beekeeping if I have to tip pesticides and chemicals and treatments into the hive: this is no life, this is no joy, this is horrible. At the same time somebody gave me a permaculture magazine and in it there was an article by David Heif talking about natural beekeeping. Because of my knowledge and experience with bees I instantly knew that this was the way forward, but what I did was, I took on the mindset of natural beekeeping as a conventional beekeeper. It was still boxes, and it was still knowledge, and it was this scientific knowledge of getting into a more natural state for the bees, but through this, the natural beekeeping developed, because I came in contact with people who were getting deeper insights into bee spirituality. My fellow trustee in the Natural Beekipng Trust, Heidi Herman, she is one of those influences, and another trustee, Gareth John, and sometimes when you speak to people they suggest books, they suggest thoughts…

My greatest influence has been my partner. You know, she asked that simple question, she gently challenges me to think deeper. You have other inputs: the bee-ing of Jonathan involves the bee-ing of my daughters, my son, to see their development, all of these things… You go through life as a journey and you pick up these things, so my transition to a more spiritual, more in touch person with the bees has been a sum of everything, its the sum of my grand father and the cup, its the sum of my father, my mother, my experiences with the world, my children, my successes, my failures, and with the people Ive been living with, so maybe this is me just growing older and finding things.

I went back to my old university when I was 45, and I looked at it, and I could feel my presence walking around the streets of that city, Cardiff, but I felt a great sadness because I also felt that as a young man I was lost at that time: following this, following that, not taking time to pause… so I can look back at points of my life, and I can say, I didn’t quite get it, I was quite lost! You said to me “How did you get to this point now” – this is a long way of saying, I got to this point now, but maybe, if I reach the age of 80 I´ll look back to myself now and Ill think “You know that Jonathan, he really didn´t know anything!” [laughs] but thats ok because today, at this point, in this second, I´ve been thinking about and just enjoying the unknowing. Maybe, that little value will still be with me when I´m 80. You see some people who reach a very great age in life and they’ve still got it, they’ve still got that sparkle, and then you see some older people who say “I know what I like: I like this food, I don´t like that food, I like this type of writing, and not that writing,” and so when I grow up I want to be that unsure person, still not knowing, still being tickled by the experience of discovering something new and still being open to the fact that I don´t know, there is still so much to learn, life is a miracle that you can learn second by second. If I keep that going, that will be good! This is sounding like its well away from the question about bees you asked, but when you start looking at the hive and experiencing the hive, it is about everything… I often think that if you had a hospice where people where dying you could introduce people to just sit by the hive and just look at theentrance of the hive, the life coming in, the life going, the purpose and industry of the bees.

Stables Volunteering
To volunteer at our stables, we require:

Our intern positions are designated exclusively to students of different fields such as hospitality, arts, equine and agricultural studies, and last about 3-6 months. Interns live at the farm on a shared home with other workers, all enjoying an environment of magical nature that invites us to explore, to do hikes or simply to meditate on the beauty we are blessed with.

Interns contribute to the team of selection, depending on their studies and expertise, La Donaira is a great place to get insight into how an eco-hotel, farm and equestrian centre work together.

If you would like to apply and find out more about Internship opportunity at La Donaira please fill up the following questions:

Our team is big and we are all working to a common goal. We expect professionals with different kinds of experience to keep building our team.

Generally, our applicants come to us through the advertisement of an open position, but we also welcome unsolicited applicants, send your CV, cover letter and references to apply