Home / FEEDING THE WEB OF CONNECTIONS

FEEDING THE WEB OF CONNECTIONS 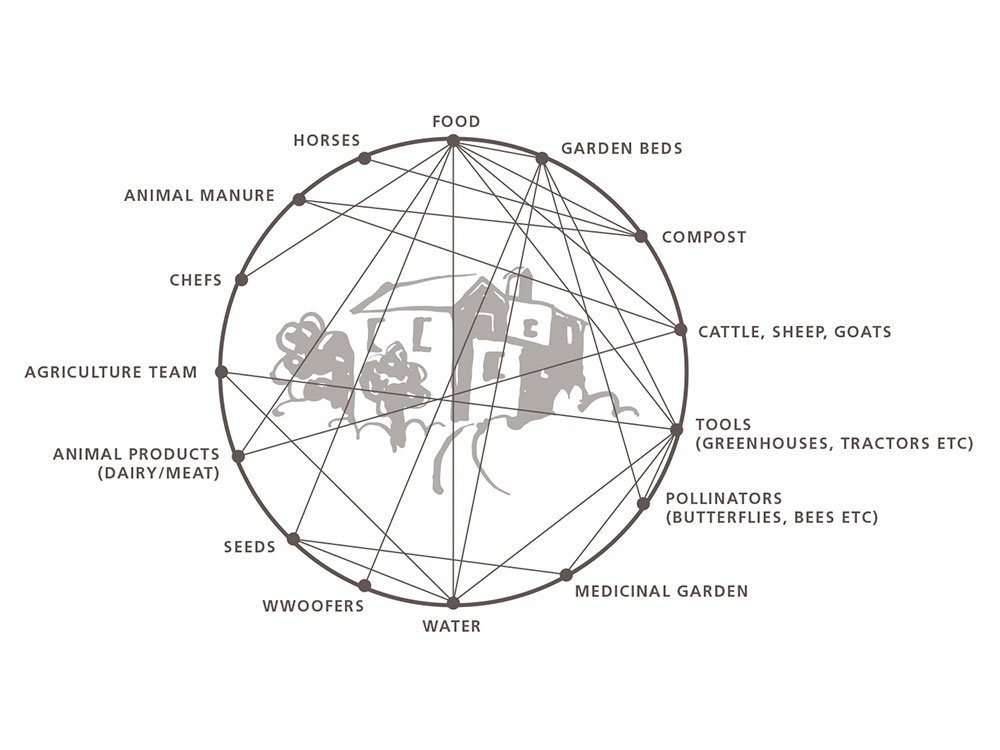 “Food is a welcoming and universal entry point into the human web and the easiest place for people to see their direct connection to nature and each other”, Toby Hemmenway

Nothing binds us together like food, and from that premise guests at La Donaira eat together; breaking bread, building bonds and creating new stories and meaning.

The history of food is the history of humanity. As one of our most basic needs it is understandable as to why it has had such a powerful influence on our history. From our earliest hunter and gatherer ancestors who survived on wild plants and hunting to the rise of civilizations with the invention of agriculture, our food and its systems have changed human societies for millennia.

First, we moved from caves to fertile lands near water and early agrarian societies formed around the production of food. The development of irrigation and food surplus storage lead to political centralization, and food became a medium of payment and taxation. Feasts became a means to demonstrate status and garner influence, and throughout ancient history food was wealth and control of food was power.

Once civilizations had emerged throughout the world, food helped to connect them together. In the Middle Ages, before the Europeans sailed to India, Indonesia, and other places, spices were worth as much as gold and often exchanged for it. The Spice Route was the culinary counterpart of the Silk Road that connected so many countries and where knowledge and cultures spread.

A notable mention in our food history was The Green Revolution of the 1950´s which increased the profitibility of global agriculture due to the creation of new chemical fertilizers and synthetic herbicides and pesticides. It was a model based on monocultures and the agricultural model that still prevails today. Food continues to be one of the driving forces of politics around the world, and today our food system is increasingly complex, with tons of food being shipped all over the word every day. Eroding soils, shrinking forests, and deterioration of grasslands represent only a handful of the environmental problems wrought by our food system. Our health has suffered too. Malnutrition, and diet-related diseases such as diabetes and obesity are directly linked to our mass production of food and on the rise. Fortunately, there are alternatives to this agricultural paradigm. The Farm to Table Movement is undeniably against the global food economy that erodes cultures and cuisines. Its about seasonality, locality, and direct relationships with farmers. It promotes agro-ecosystems with no dependence on agrochemicals and low energy inputs, in which ecological interactions and synergy between biological components provide the mechanisms for the systems to sponsor their own soil fertility and productivity.

If it is true that “we are what we eat” and that telling stories is what makes us human, then at the intersection of these two adages lies an immutable truth about the stories we tell about the food we eat.

At La Donaira we rely only on locally sourced food, starting with our own food gardens located at various places within the finca to The Bay of Cadiz where we buy our fish, and to the Sierra de Grazalema and Serranía de Ronda for our artisan charcuterie. Our chefs Frederik and Fabienne serve imaginative meals based entirely on high quality ingredients and are inspired by the seasons and informed by their own explorations. They serve two distinct cuisines both delightful and complementary and create meals that are genuine nourishment for the palate, the mind, and the soul.

The meals served at La Donaira are the last phase of a complex and interconnected system that is important for us to acknowledge. Truly flavourful food involves a recipe more complex than what is conceived in the kitchen. It goes beyond the crop, the cook, or the farmers – to the entirety of the landscape, and how it fits together realizing that good farming and delicious food are inseparable.

Drawing from Permaculture we weave productive relationships to create a network of harmonious connections and a thriving system. Below is a diagram of a “Web of Connections” to showcase the interconnection of the major elements in our Food Production Design based on a system that encourages diversity, complexity, and a reverence for nature.