A DARK STORY IN THREE ACTS 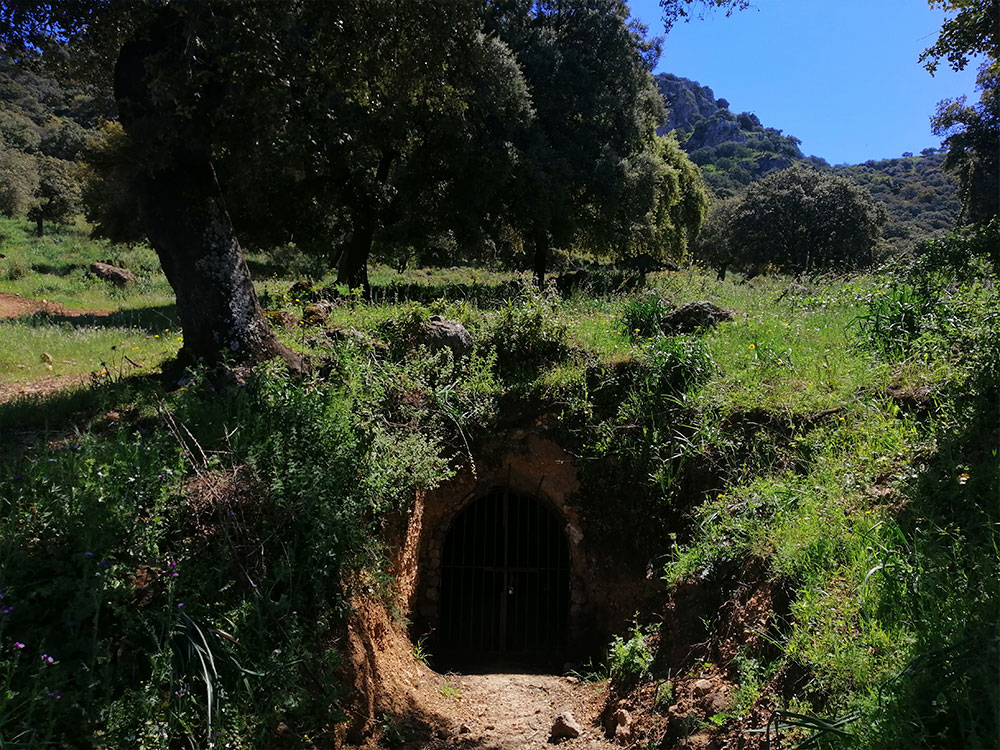 Stories bring places to life, and places attach special meaning to stories. Every story takes place somewhere, and every place has a story to tell. Our story begins in the womb of the mountains with the minerals that have been existing here quietly for millennia. Our farm is situated in the Mountain of Malaver between the small villages of El Gastor and Montecorto and because it is situated between different tectonic mantles it is an area with great geological diversity. It is this wealth in minerals that have allowed mining operations since prehistory to continue into the early twentieth century.

The origins of the Malaver Mountain occupation date back to the Neolithic period, associated with small agricultural communities that settled in the area due to the fertility of their lands, the abundance of water, and the existence of flint deposits used for manufacturing tools.  Neolithic people roamed the hills around La Donaira leaving many fascinating reminders of their presence, including megalithic burial grounds also known as dolmens. The most famous of these is El Charcón, commonly known as the Giant’s Tomb’ dating from the Bronze Age. The contents of the chamber have been looted since its discovery but during excavations arrowheads, ceramic bowls, pots and dishes were found.

Act 2 – Mosaic of Civilizations that Inhabited our Land

It is documented that the Phoenicians and later the Romans exploited existing iron, silver, lead and manganese mines in our mountain. The first mention we have found on the use of these mines dates from 1610 when Diego de Maraver a humanist from Ronda sent a letter to Bernardo de Aldrete telling him ¨It is almost a league from Accinipo* , a little less than three leagues from this city to the west is the Escanria (today known as La Alcauría – which is part of  La Donaira-), which is a land of labor where you can find a truly fine silver mine of Roman times. Many people have entered the deepest parts of it and today around the fields there is evidence of silver smelting everywhere. In my time this mine was registered and belongs to a ¨cortijo¨ of mine. One or two mouths were opened at the foot of the mountain and many stones were taken and melted in the same houses of my farmhouse and 15 or 20 pounds of silver were obtained , and because the old owners of this mine did not know how to do the smelting, they didn´t take out a large quantity and the lead that came out of the foundry was not wanted by the soldiers and hunters because they said that the lead had a lot of silver and broke their shotguns´ barrels.”

In the XVIII century there are some references that allude to the exploitation of lead, silver, and red ochre (pigment in paintings and pottery extracted from iron oxide and one of the oldest chromatic decoration techniques employed since antiquity) in the Montecorto mines. In the book ¨Dialogues of Erudite Memories for the History of the Noble City of Ronda”, written in 1766 by Doctor Juan Maria de Rivera but first published in 1873 we find “In our area mines of silver, and other metals can be found in Montecorto, where there is a profound mine with mounts of slag in its entrances. From my understanding the Phoenicians were the first to work in them and today they are still used for silver.”

Finally, there is archaeological evidence of Medieval Islamic Ceramics (from the Almohad Caliphate and the Nazrid Dinasty) using red ochre extracted from the mines and dating from the beginning of the XII Century to early XV Centrury. The Nazrid Dynasty was the last Muslim Kingdom in Spain and fell to the Catholic Monarchs in 1492.

Act 3 – Early XX Century and Current Projects in the Mines

Older locals in El Gastor still remember stories about the Germans who came to the mines in the 1930´s to extract iron. They left tunnels, pools for ore washing, furnaces for ore melting, canals, installations for workshops and small quarries. In the end, removing the sulfur from the iron ore was too laborious and expensive and the mines were abandoned until now. Today there are 2 projects underway in the belly of the mines: One is for mushroom cultivation and the other for wine fermentation and maturation.

One of the main characteristics of mines, is that they keep a constant temperature and humidity, which makes them an ideal place for the cultivation of saprophyte fungi which obtain nutrients directly from dead organic matter. At the beginning of Spring we started working with Beli, a mycologist who will be measuring different parameters (temperature, humidity, oxygen, and other variables) during the different seasons to create the optimal conditions for the cultivation of edible and medicinal mushrooms. Among the species of fungi that we will begin to work with will be Oyster mushrooms, Shitake mushrooms , Lion´s Mane mushrooms and Reishi mushrooms among others. The project of cultivation not only will give a new use to these mines but will also reuse farm residues in a sustainable way.

Lastly the mines are being used to test for stable fermentation temperature and to determine if conditions could be right for wine maturation. Maddy, our in-house vintner appreciates the idea of utilizing the existing structure of the mine that ties into the historical use of the land.

The Mountain of Malaver is a unique cultural landscape with incredibly rich history. We look forward to maintaining the legacy of working the mines, albeit in a different way and to continue weaving our history within it.

* Acinipo was a Roman city  believed to have been founded by retired soldiers from the Roman legions more than 2,000 years ago. Today it is an archaeological site that is well worth a visit.