Home / THE RE-ENCHANTMENT OF THE WORLD

THE RE-ENCHANTMENT OF THE WORLD 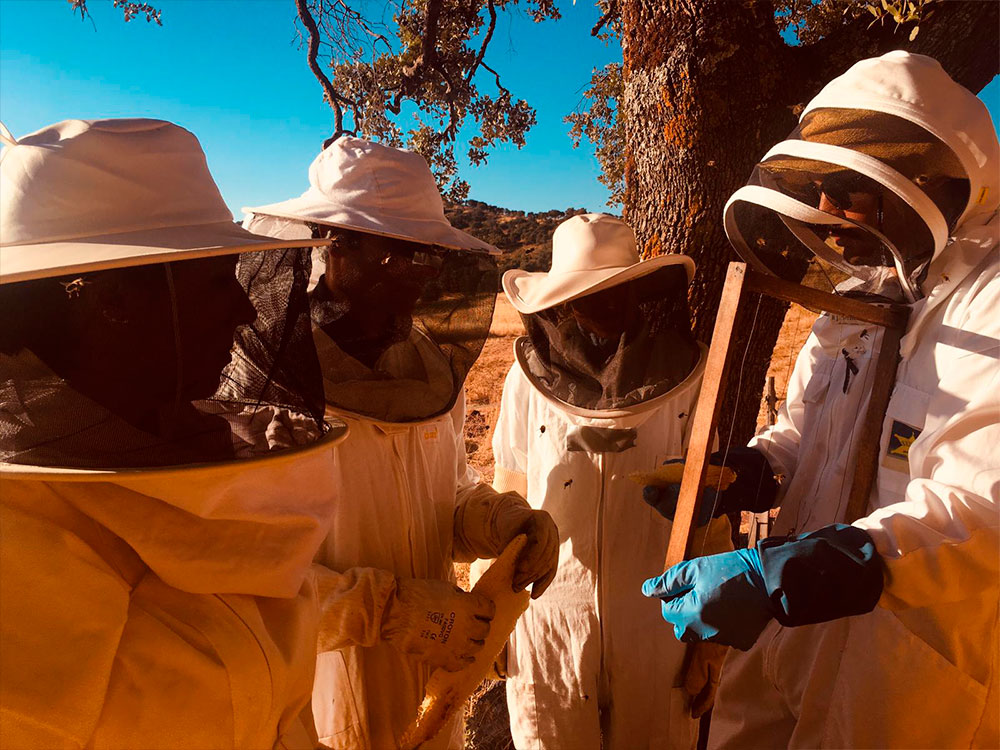 Another world is not only possible, she’s on her way. Maybe many of us won’t be here to greet her, but on a quiet day, if I listen very carefully, I can hear her breathing.”

To become at home in the world

Look and listen carefully in the early evening and you will notice that the farm is home to far more than humans or domestic animals. A parliament of fowls sits in permanent congress, swirling the evensong of owls, woodpeckers, swallows, sparrows, kestrels, rock doves, and quail together with the audible wing-whoosh of immense griffon vultures soaring westward to roost in the peaks at the other side of the valley. Foxes and bats screech in the night. Field mouse, rabbit, wild boar, and ibex – a large indigenous species of wild mountain goat – rustle in the under-brush. Genet, wildcat, mongoose, caracal and Iberian lynx stalk their prey in the shadows. Snake, toad and salamander slither through moist crags. Cicada, mantis and scorpion pick their prickly way amid stems and leaf litter.

When a farm is treated as an ecosystem, the borders between the human and the wild begin to blur. The artificial boundaries between culture and nature – which have turned so many civilised souls into frightened, ignorant strangers within an empty, incomprehensible desert – begin to dissolve, and we find ourselves once again at home in an animate, sentient, intimate landscape suffused with the palpable bloom of the marvellous.

The purpose of conservation at La Donaira is not merely to preserve a supposed wilderness artificially separated from human beings  – which would mean to preserve an already degraded habitat and the categorical separation which lead to its impoverishment in the first place – but to regenerate, enrich and extend the wild through a continuous, sensuous intercourse between culture, agriculture and ecology: an ever deepening, widening inter-penetration that liberates the wild within us at the same time as it liberates the wild from us and the cold Cartesian logic imposed by an abstract instrumental reason.

At the forefront of these efforts is the honeybee sanctuary and re-wilding programme run in partnership with Jonathan Powell of the Natural Beekeeping Trust, an award-winning project which is one of the only dedicated honeybee reserves in the world. The hives have constant access to pollen from a highly diverse, nutrient-dense mix of native woodland and organic farmland, without chemical treatments or artificial manipulation of any kind, allowing them to strengthen their immune systems through natural selection. For more on this aspect of our work, see previous journal articles Do you Feel the Bees, The Darwinian Beekeeper, and our interview series with Jonathan.

Source: Natural grazing practices in the rewilding of cattle and horses, Rewilding Europe

Mingling among the beehives on the mountain roam a small herd of cattle, an indigenous landrace known as Pajuna, kept here not only for what they can do for us, but to preserve the genetic diversity of a rare and endangered breed as well as for their ecosystem services they perform. Pajuna are one of the oldest known domesticated breed of cow, a direct descendant of the wild Aurochs (Uro). An ancient breed indigenous to the region, they are extremely hardy and easy to keep – winter and summer outdoors, 100% grass fed. Pajuna are not ideal for meat or milk production – but they are optimized for easy keeping in the dehesas, which co-evolved with them: one of the most important functions of the dehesa in pre-industrial Spain was to provide grazing grounds for oxen, the draught animal that once served as both truck and tractor throughout Andalusia within living memory; in turn, the grazing and periodic ploughing performed by the pajuna were one of the most important functions that served to maintain the open-canopy structure of the dehesa, encouraging a park-like groundcover of grasses rather than a dense buildup of underbrush: an instance where the preservation of agricultural biodiversity has become inseparable from efforts to restore biodiversity in the wild.

Pajuna are one of the six breeds chosen in Rewilding Europe´s Tauros Project, which aims at breeding an “aurochs 2.0” to fulfill the vital role which this keystone species once played in maintaining the health of the open woodlands, forest and riparian edges, savannas and grasslands of Africa and Eurasia.

For millions of years, European land has been grazed – by wild herbivores, and, far more recently, by domestic cattle. This grazing has kept parts of the land free from forest, providing open habitats that support a wide range of plants and animals.

But today a decline in animal husbandry across Europe means these habitats, and their biodiversity, are in danger of disappearing. This is where the auroch, or its descendant – the so-called “Tauros” – comes in. Through selective breeding, Rewilding Europe and its partners want tauros to occupy the niche the auroch once filled, keeping Europe’s rich mosaic of open landscapes flourishing through natural grazing.

The potential beneficial effects that reintroducing the Tauros might have in nature conservation are beautifully displayed in the illustration below, but the impressive impact that indigenous rewilded animals can have on ecosystem restoration has already been dramatically demonstrated by Isabella Tree at Knepp Wildlands, a pioneering rewilding project comprising 1400 ha of former arable and dairy farm land in SE England using herds of free-roaming “feral” livestock, including old English breeds of cattle, ponies and pigs, to drive habitat regeneration. Focusing on restoring dynamic natural processes, in just 14 years the project has seen a spontaneous revival of many rare species.

As you stroll through the holm oaks where the bees and cows wander at their ease, you will also have the opportunity to notice the ingenious “biodiversity boxes” designed by Paco Volantes — which house birds, bats, and insect pollinators all together in a sort of miniature wildlife apartment building hanging from the trees — throughout the farm and surrounding forests. More than one hundred of these creative and lovingly hand crafted homes have been installed in to encourage the proliferation of beneficial predator species which form a part of the integrated pest management strategy for controlling mosquitoes, oak infestations and more.

All human questions arise from the earth, and, finding no answers in the world of men, return to her. It is our hope to inspire and encourage more people to consciously realign with the rhythms, patterns, and wisdom of nature. Although the confusion, sound and fury of modern civilisation envelop us on all sides, an abundance of practical solutions lie waiting to be discovered right beneath our feet. Take a walk on the wild side with us and experience for yourself the re-enchantment of the world. But be careful! It’s a kind of magic that might just stay with you wherever you go…

Wilding: Returning Nature to Our Farm, by Isabella Tree

First-hand account of the remarkable re-wilding experiment at Knepp Estate, mentioned above. Of particular interest, considering the importance of afforestation in efforts at mitigation of and adaptation to climate catastrophe, is the explanation of natural tree regeneration, whereby birds and mammals are allowed to plant trees for free, rather than rely on inefficient human labour, and early-succession species are allowed to protect canopy layer saplings, rather than rely on costly (and far from ecological) plastic tree-guards, applying the ancient English forestry adage “the thorn is the mother of the oak”.

At the heart of the Knepp rewilding experiment is the influence of Dutch ecologist Dr Frans Vera, whose ground-breaking book was translated into English in 2000.

Vera identifies grazing animals as a fundamental and necessary force of natural disturbance. Previously, the impact of herbivores on the landscape of temperate zone Europe has been largely overlooked. Vera argues that we have forgotten about the huge numbers of megafauna – many of the species now extinct – that would have played a hugely influential part in our ecology.

The Reenchantment of the World by Morris Berman

Written by a mathematician with a PhD in the history of science, this perceptive work constitutes an important contribution towards the “internal critique” of scientific consciousness which the modern world has inherited from the Enlightenment by someone who knows well what he is talking about. It also points the way towards a transcendence of the limitations inherent in this consciousness, not by going backwards towards myth and immaterial spirituality, but through an ecological vision grounded in the real and intimate connection between man and nature.

Hayward, a PhD nuclear physicist and senior Tibetan buddhist instructor, presents a fascinating treatise encouraging us to question our own conceptual presuppositions, and proposing that insights from both objective science and subjective meditation can assist us in the process.