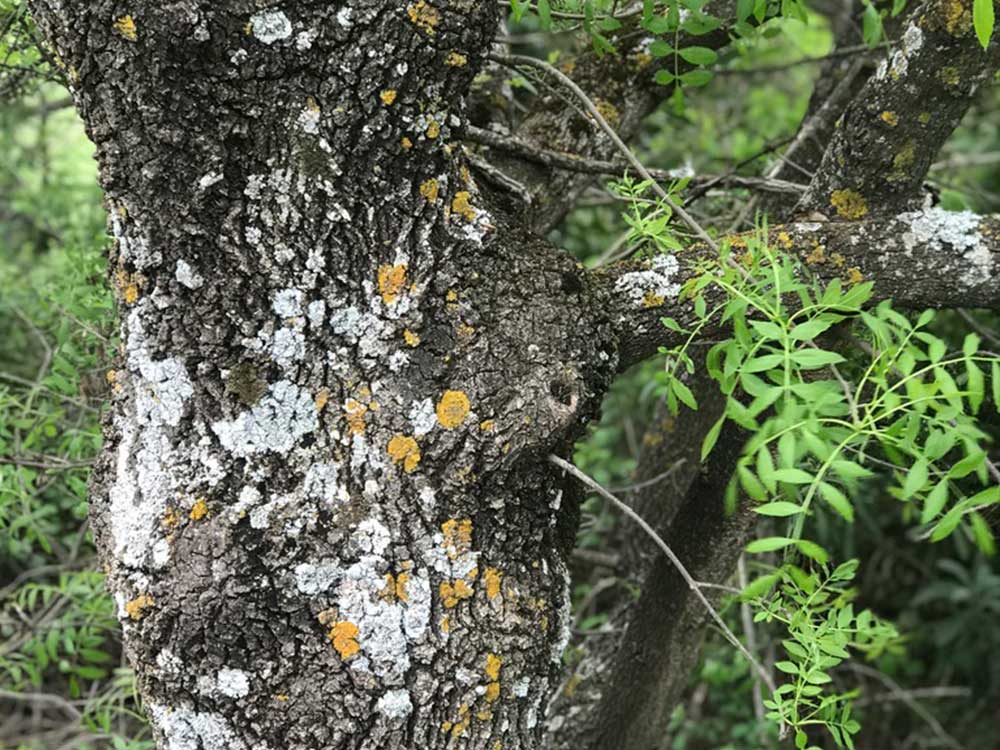 “The task of the right eye is to peer into the telescope, while the left eye peers into the microscope.”– Leonora Carrington

Lichens are expressions of pure joy and remind us that life is art and that deeply integrating into one’s environments is the most refined expression of that art. These exquisite mini ecosystems that form a diverse range of colours and shapes dot our landscape with tremendous beauty. Generally overlooked in public consciousness, these ubiquitous living organisms have a fascinating story to tell. Covering 7% of the earth surface, lichens paint the rocks of the desert with living murals, drape the temperate forests with lace ribbons, and thrive in the harshest of climatic conditions.

But, what exactly constitutes a lichen?  Inside the ecosystem of a lichen are most of the primary components of life: fungi, bacteria, algae, and cyanobacteria, all living in a discrete synergistic system that is capable of withstanding such extreme conditions that they have even survived a trip into outer space! Studying lichens in 1879 the German botanist Heinrich Anton de Bary discovered that they were formed by a fungi and an algae in a beneficial intimate association and coined the word symbiosis to describe them. The fungal symbiont creates a thick protective skin around the algae to protect it from desiccation. In exchange, the algae gives the fungus photosynthesised sugars. And together they form pigments and shapes that help them survive and thrive in their other-worldly surroundings. This symbiosis of alga and fungus is thought to date back to the first ancestors of terrestrial life but new theories are emerging contesting this wide held assumption. Science is always evolving and we are constantly learning new things about them. In 2016 scientists made a surprising discovery. They found that many lichens also contain a yeast belonging to a group known as the basiodiomycetes. The presence of the yeast was completely unexpected and the researchers believe that this organism makes chemicals that protect the lichen from microbes and predators.

There are currently 15,000 species of identified lichens which range in size from 1 mm to more than 3 m and grow between a few millimeters to a few centimeters per year. Lichens become dormant when growing conditions deteriorate and can stay viable for up to 10 years at cool temperatures. Scientists believe there are thousands more that have yet to be “discovered”. As landforms diversified and developed, as mountains rose defiantly and weathered into soft hills, lichens have been patiently watching from their perches. Some contemporary specimens are over 5,000 years old – relics from a distant age. One species in the artic is believed to be 8,600 years old, by far the oldest living organism on the planet.

Though their slow and ancient nature lends to lichens being lost in the shadows of the larger members in their ecosystems, these fascinating beings are not static. Lichens are said to be the pioneers in establishing vegetation on bare rocky areas by breaking down rocks physically and chemically which helps with soil creation. They also perform numerous mutualistic roles with bacteria, insects, rodents, and humans.

There are four main reasons that humans work with lichens: as medicine, as a natural dye source, to study ecosystem biodiversity, and to monitor environmental health. Lichens are very sensitive to atmospheric pollutants and unable to grow in towns, cities and industrial sites; therefore, they can be used as reliable biological indicators of pollution.

Lichens also perform very useful functions in nature. They provide shelter for other organisms, and materials that animals can use to build their homes or nests. Also, they serve as important food source for many invertebrates, animals and humans. Different cultures around the world such as the Scandinavians, Native Americans, Israelites, Japanese, Indians, and French have all relied on lichens as a food source. They have also been used by many different countries in times of famine because they are rich in polysaccharides, certain enzymes and vitamins.

As ubiquitous as lichens are, we still have a long way in uncovering many of their riddles. Hopefully this short piece will awaken your interest in these captivating beings and next time you spot one may it remind you of the magic that is to be found everywhere in nature. Lichens are the beholders of stories on landscapes and climate, if one takes the time to witness them clearly.