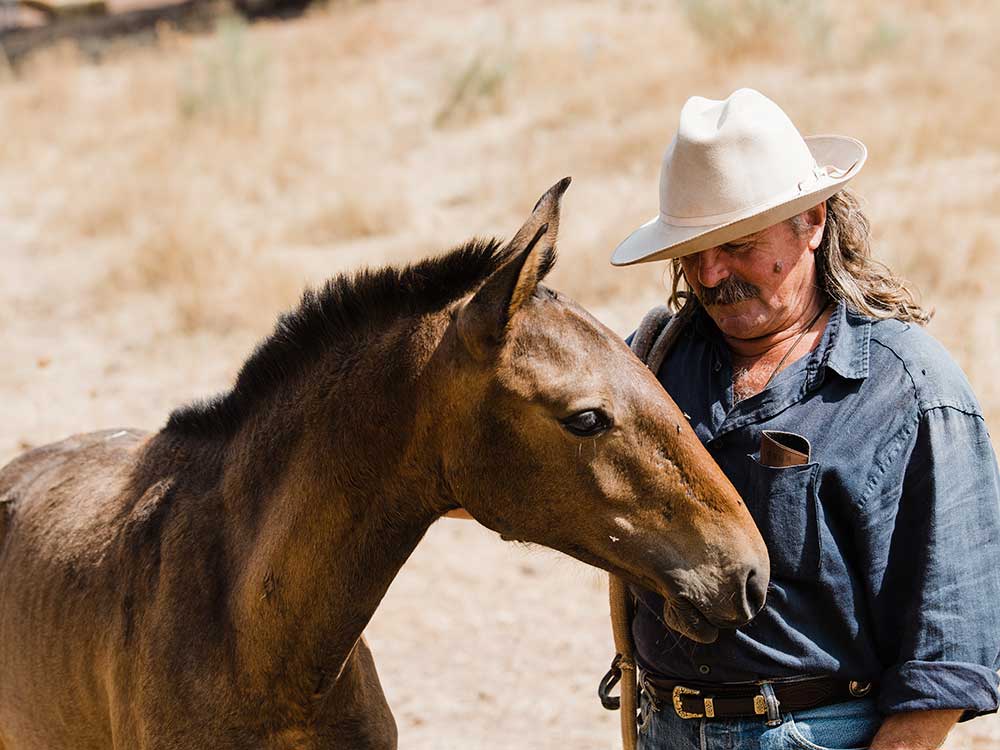 Seamus Gaffney has been a part of La Donaira from its inception. He has been working assiduously for the past 12 years building trustful relationships between man and horse, according to the principles of natural horsemanship. An indomitable spirit with a big heart, we talk to him about his life’s journey and how he ended up becoming an integral member of La Donaira’s core team.

LD: When did you arrive to Spain?

S: Fourteen years ago I did a demonstration with the ponies I was starting in Wales. I built a round pen, I cut the trees down for it, split the timbers, and in the crowd was a couple, and they were going to Spain to open up a riding trekking place where they would take people in the mountains. They were into the Appaloosa , an American breed made famous into by an American Indian tribe, the Appalousa. They are very beautiful and special horses. I remember thinking “why are you bringing horses to Spain”, I didn’t know much about Spain but I knew it was a land of horses. Anyway, they insisted so I helped them start up, and they had a bunch of 2 year olds. So I got busy with them and I spent nearly two years there in a place not far from here called Setenil.

LD: And your arrival to La Donaira?

S: That job was coming to an end and somebody told me that there was this farm near El Gastor. She said “they are looking for someone like you”, someone who could actually not just ride horses, but also train them, catch them, and all the rest of it, so I came up here and there was one guy at the time, not many other people. There were about 35 mares and their foals. And the foals were about 8 months old and they should have already been taken away from their mothers. You could walk up to them, but you couldn’t get a head collar on them. Horses are sweet enough when they want to come to your space and touch you but as soon as I wanted to grab hold of their heads, off they go! Also there were no facilities here, so it was a hard hard job when I first came here. They never gave me a job, I just had to do it and they’d pay me, and I didn’t think I’d get a job but I caught all the horses anyway.

S: It must have been around that time, yes. I mean really, to tell you the truth, I came here when I was old. I’m well old now but for a horse man its a heaven. Its beautiful as you know, and I was always very interested in the project and I never really worked with Lusitanos and they are a magnificent breed and so that just gathered momentum. I was offered a job, and the rest is history isn’t’ it? I mean we breed horses and I’ve been lucky enough to be kept here and I still work with the young horses, and I feel I’ve got the experience to do it.

LD: So how many horses do you think you’ve worked with since you’ve been here?

S: I don’t know, must be more than 70 horses I suppose. How many foals were born the past 12 years? Approximately 8 a year, so that gives you an idea, so hopefully we will get some nice sport horses. Dressage is still the main sport, and we want to get really a good stock of horses that would be able to compete on a very high level.

LD: I know you work with the foals and do Natural Horsemanship demonstrations; do you do hacks with clients as well?

S: No, I don’t. I used to, I’ve done everything here. I’ve taken carriage rides out, the hacks. In fact, this weekend I’m doing it because the girls are going to a festival so I said I would come and give them a break but its not really my job. My job is working with young horses. I also teach when I can helping people who want to learn a different side of horses.

LD:  You teach them that its not through domination? Is it a gentler way?

S: You would call it gentle in a way but its a completely different way because its not about hitting horses with a stick or even being too gentle, because too gentle is not getting the job done. So, there is a middle ground, the equilibrium and you want to find that and work that way with your horses or mules.

LD: I imagine that if you are using Natural Horsemanship instead of other techniques of raising young foals it takes longer because you are not relying on domination and intimidation which seems a much quicker way to “break them”.

S: It is slower at the beginning but then you make up for the behaviour and things go much smoother so it speeds up in that way. Working with young horses is everything and you reap what you sow.

LD: What is it about this project that drew you to it and that you like?

S: What drew me to it was first of all the actual breed of the horse. I’ve worked with many many breeds and I did read up on the Lusitano and they sounded fascinating, so that was a big drawing point for me. Secondly, the location. The mountains here in Andalucía are just magical and thirdly Manfreds’ vision of the farm and how he is driven. I did get to be friends with Manfred and agree with his thoughts and his project has always been very interesting to me.

LD: And lastly, do you have a fondness for a particular breed?

S: I must admit, I did like the American quarter-horse. They were called quarter horse because they were the fastest horse over a quarter of a mile. I like them because I’m into working horses, and they were just made to work cattle and horses. I’ve got a horse here, she’s my own, Sissy, and she is not a tall horse but if you squint your eyes a bit she looks a bit like a quarter horse. I did train her up to herd the horses and she is wonderful. In the early days here, I did a lot of work on her back with the horses. When the veterinary wanted horses up, I would go down with Sissy and she was great at that job. I hardly have to touch the rain, she would just bring the horses up. And that could happen again up here. I think that the future here is a big one. This will be a big exciting place in the future. Maybe I won’t be part of it but I’m so proud to have been a part of its beginning and one day to be part of its past.