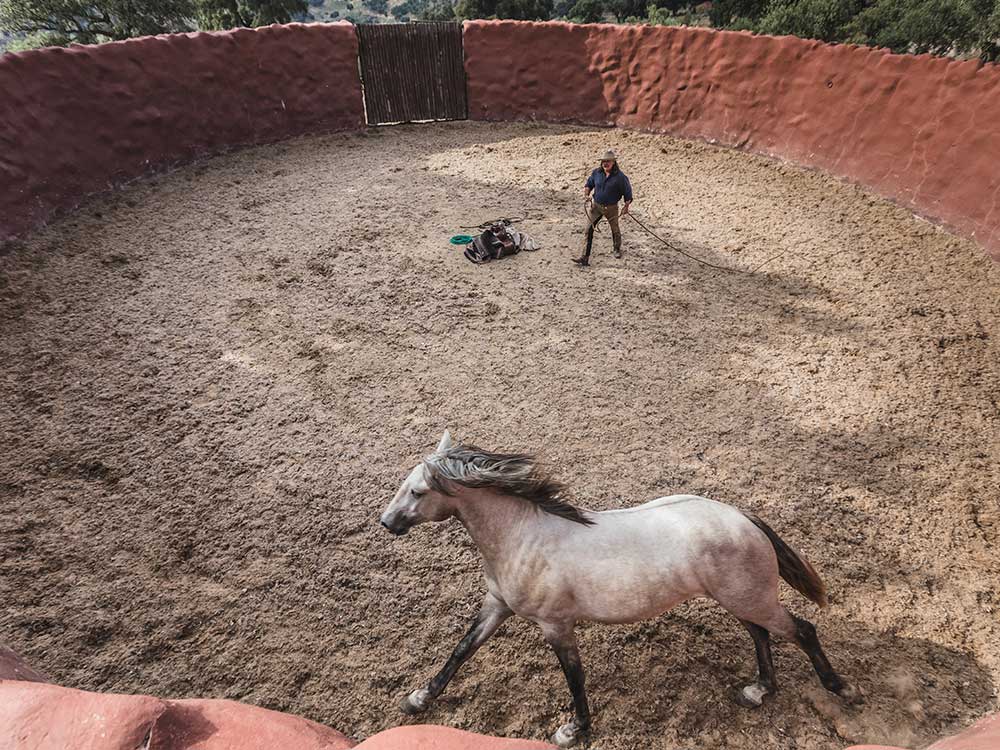 Part 2:  The UK and Abroad Years

Seamus Gaffney has been a part of La Donaira from its inception. He has been working assiduously for the past 12 years building trustful relationships between man and horse, according to the principles of natural horsemanship, also known as natural dressage. An indomitable spirit with a big heart, we talk to him about his life’s journey and how he ended up becoming an integral member of La Donaira’s core team.

LD: What did you do after working as a butcher? Did you start working with horses then?

S: No, from the butchery I went into my father’s profession which was the gas industry. From Scotland to the South we were laying the huge mains from the sea through the ground so people could have gas. Then, I actually got involved in the art world for a while. I went to night school and did various things with still life’s and model drawings. But back to horses, I always had a thing for them. But in the city I didn’t know how I would ever get to working with them. I never thought about going just to ride them. I couldn´t afford going to a poncey stable and pay to ride a horse, we just didn’t do that. My father who had worked with horses since he was a child too, he just didn’t talk about them. He liked them, but the only time we talked about them was when I got older, when I could drink in a pub and all the Irish guys would meet in the bar and they always talked about work, horses, and sometimes women.

LD: So how did your career in Natural Horsemanship begin?

S: I went to America, I went to Montana in my late twenties. I was looking for a way of working with horses and I knew there had to be a better way of not just training horses, but handling horses and being around them in a more natural way. In the 1980’s things were happening with horses, and there was kind of a revolution, people talking about Monty Roberts, so it was kind of happening. Then it was about finding people who were doing it, and there were not many people around, but I was lucky enough to find a few people in Montana. I worked for nothing to actually have the privilege to work with youngsters. Professional people would not let you near a young horse unless you had a way or you got the experience and the only way you got experience was to do all the hard work and it was really tough work.  And then a few years later in the 80’s I went to Brazil and that was a wonderful experience because we were working with cattle and horses in a real hard-working ranch.

LD: You were a wrangler in Brazil?

S: No, I wasn’t a wrangler. Actually, funny enough, wrangler is a man who works just with horses. I suppose you can call me a cowboy. Of course, down there they call them gauchos, and they are tough guys. They used to wear a .38 pistol and a big knife.

LD: Where did you go from Brazil?

S: After Brazil I decided I wanted to continue working with horses. Then I went back to England and I got involved with the best people in the industry who were doing Western riding. I didn’t particularly want to do Western riding but I liked the way they started their young horses. I had a child at the time so all these things are going in the background. Then in England, Germany, Italy and quite a few places in Europe were doing Western riding, which was an American way of riding, but they did a lot of natural horsemanship, because to be able to ride the horse naturally you had to bring the horse up a lot better than a lot of people did. The people that were training the horses were naturally seeking out people who knew how to turn these horses out.

Quite a few Americans came over and they gave seminars and it started to grow. I was there at that time and I got a job with a trainer who had 2 American trainers that worked with us. That is when I started really working with yearlings and 6 month old horses and I didn´t need convincing in their Natural Horsemanship teachings because I knew that this was the way to work with horses. You had to get the horses young and although its slower at the beginning you make up for it in their behaviour and things go much more smoother. Working with young horses is everything and you reap what you sow.

LD: So, training with the yearlings was in the UK?

S: Yes. I was lucky enough that I didn´t have to travel because they were importing American quarter-horses because Western riding became so popular. Then they started breeding them but, of course, in Britain at the time they weren´t using them for cattle. They were using them for show, which I wasn´t interested in but they had foals and yearlings and I got the job of training all the young horses.

LD: Where did you go from there?

S: We are only up to the 1990´s, well a lot happened in between that, but I had decided that my profession would be horses. Cutting a long story short, I did get more jobs and strange ones. I got a job in the mountains of North Wales because they wanted to catch the wild ponies because somebody in the 1890’s had thrown a few Arab horses in the Welsh Mountains and they had hundreds of these beautiful ponies. Anyway, they paid me and this other guy to go round them up and bring them down and start to break them in, that was real cowboy work, and that was in a place called Snowdonia. That was a great job, and from that I got more work and I was working with horses full time. I took jobs sorting out problem horses, jobs driving horses, and I also got involved in carriage racing for a while.

S: Well, its called a marathon. You take off and do many kilometres through water and mountains and you have one or two horses in the front. I got on the training side as well because not only was I driving, I was starting young horses to pull carriages and that was a great learning experience. I think its a bit harder to get horses to pull things than people believe.

S: Companionship. I feel that from them and I enjoy the relationship that you build with these wonderful animals. If you spend lots of time with them, almost every day, which I usually do you get so much from it, but you have to put that time in. Then it becomes a way of life and that’s my way of life. I’m fairly good with them and they are good with me and I would really miss it terribly if they weren’t in my life.

In terms of qualities you need to have a good work ethic to be with them and discipline because its hard work. Patience, of course, especially when handling young horses. I handle horses from when they are born to their first ride or their first drive so for me its even more intense but its a wonderful thing to be there with them all the way through. After all, they didn’t ask to be with us, we said “you’ve gotta be with us”, and its nice if they accept that, and they want to be with you, and that sort of thing is happening and you feel it, so it gives you many things. If you haven’t got patience you can’t successfully work with horses.

In the next and final instalment we will go over Seamus’s arrival to Spain and his work at La Donaira. To be continued…