All year long, the volunteer gardens have been constantly growing through the addition of new raised-beds, tree-plantings, and composting.

The method used in the construction of the vegetable beds is known as “deep mulching” or “sheet composting”, which allows for the rapid creation of fertile topsoil through the same process as compost: layers of organic matter such as cardboard, weeds, straw, and manure are stacked on top of one another, with seeds or transplants placed on top. In effect, it involves planting onto a fresh compost heap, without the need to wait for the compost to mature. Like most regenerative systems, the initial design and setup is an input-intensive process, as it can be a fairly strenuous task sourcing and assembling the material. But once the system is in place the design results in no need for weeding, digging, tilling or fertilising, with the only maintenance being to add fresh layers as the soil food web continues to break down the original organic mater. 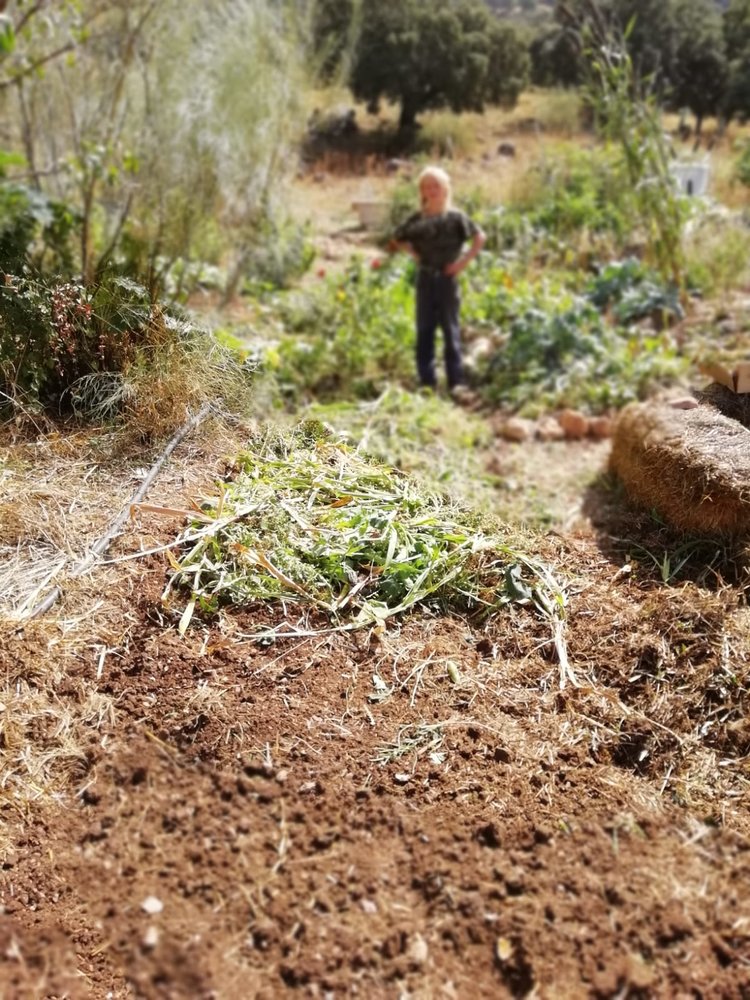 *Step 1: Alternate layers of organic material — fresh green and dry brown — stacked on top of each other

The roots of this method can be traced back to the natural proccess of pedogenesis, which converts dead plants into living soil. It is also observable in the process whereby leaf-litter from forest trees and grasses covers the surface of the earth in a protective layer — for this reason mulch has been called “nature’s blanket”.

At the human scale, the first person to pioneer this method was Ruth Stout (1884 – 1980), a fiercely independent spirit who smashed illicit saloon windows during the prohibition era, gardened naked all her life in full view of the neighbors on her suburban street, and described herself, in her late 80s as “a woman who is always out of order” with respect to social conventions.

In 1955 she first published her discoveries in mulch gardening: How to Have a Green Thumb without Having an Aching Back. In 1963, she refined her methods with the publication of Gardening Without Work: For the Aging, the Busy & the Indolent. In an interview published in the 1970s she described how her methods worked for herself: 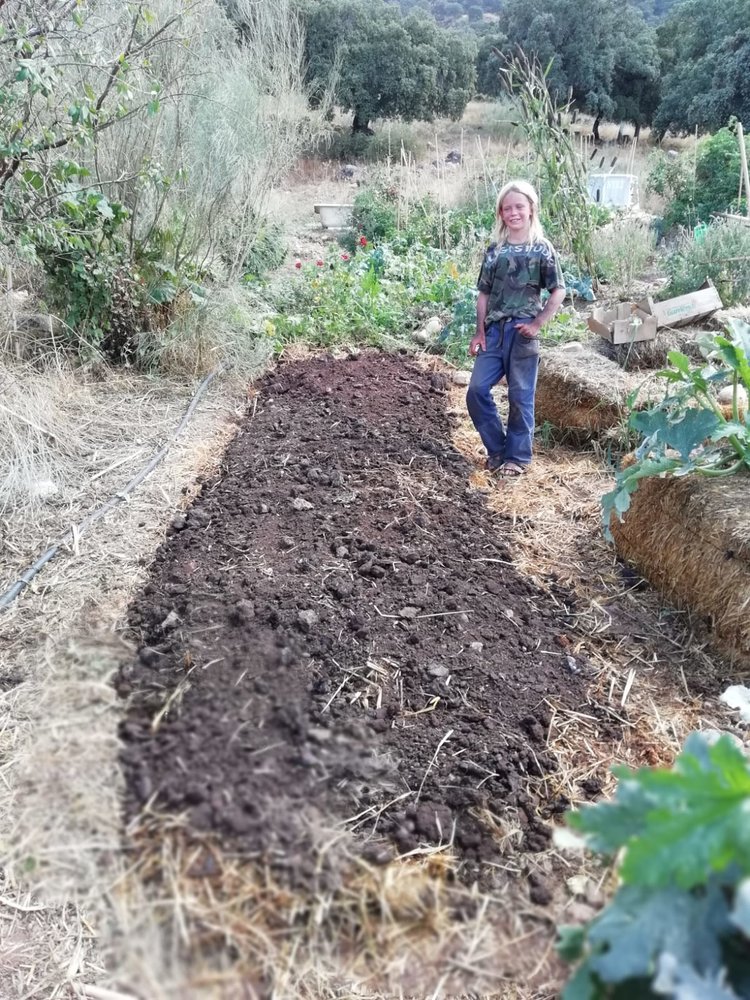 *Step 2: A thin substrate of mature compost or good soil is placed on top, into which seeds or seedlings are placed

“At the age of 87 I grow vegetables for two people the year-round (haven’t set foot in a grocery store for 14 years) from a, doing all the work myself and freezing the surplus. I tend several flower beds, write a column every week, answer an awful lot of mail, do the housework and cooking-and never do any of these things after 11 o’clock in the morning!

“Now your hands are going to go up and ask me what time I get up. My answer is to that is sometime between six and eight, according to when I feel like it and when I want to. And the first thing is a long, leisurely breakfast, Roman style, stretched out on the couch; but I’m all through with all of this by 11:00 in the morning.

The reason is that I never have to plow, or spade, or cultivate, or weed, or hoe, or use fertilizer, or use a poison spray, or use a compost pile, or water. I just plant and pick. The reason that I can do all this is because I keep the ground covered all year long in hay mulch—which rots, fertilizes the ground, keeps down the weeds, keeps the ground soft, and that’s all there is to it.”

Bellow, a video presented by Jonathan at the recent Learning From the Bees international conference, offers an overview of our ecological restoration work which you are welcome to come see for yourself.

The spirit of inaction that so brilliantly animated Ruth Stout was shared by many other permaculture pioneers, such as Bill Mollison — arch enemy of the “make-work” society — and Masanobu Fukuoka, who cultivated indolence to a degree nobody else in agriculture has before or since. 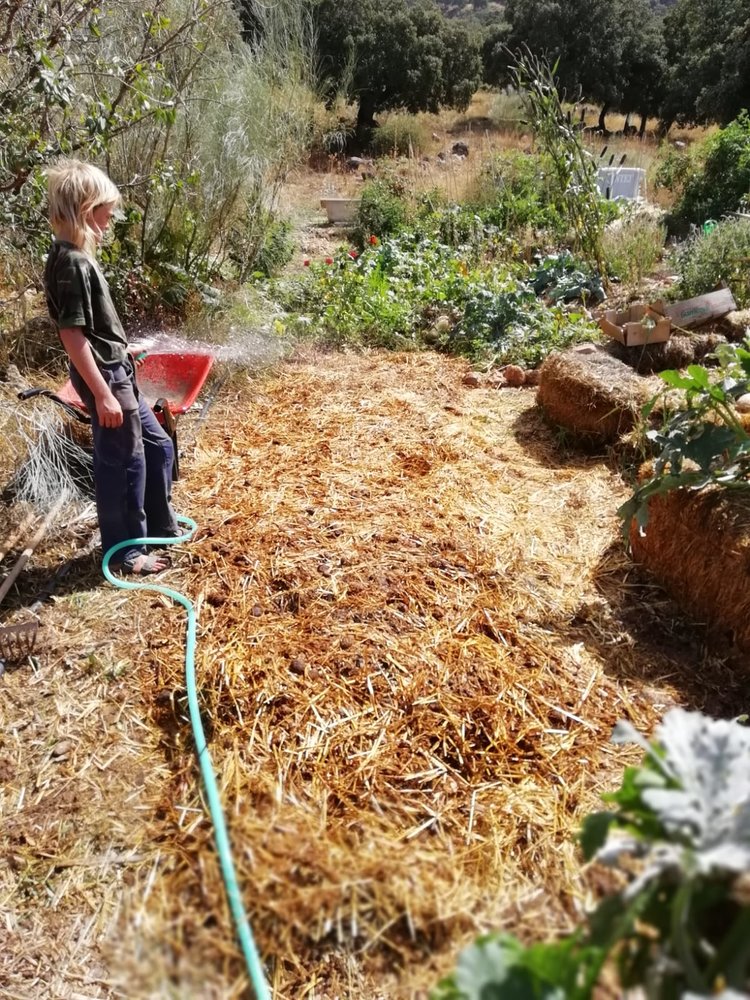 *Step 3: A final cap of mulch protects the topsoil, and all is watered thoroughly to ignite the decomposition process

In an illuminating interview with fellow permaculture legends Bill Mollison and Wes Jackson, Fukuoka summed up his aims and methods:

Q: Maybe the best way to start is to simply ask each of you about the purpose of your life’s work.

FUKUOKA: Part of my purpose is to create a society where no one has to do anything.

Q: I beg your pardon?

FUKUOKA: [Draws a picture of a man sleeping under a tree]: This is a natural farmer, sleeping in the sunshine. He does no fertilizing, no plowing, no weeding—almost no work. You could say I have been sleeping for 40 years, yet my yields are as high as those of the farmer who works all the time.

To be idle for 40 years might be an ideal beyond most mere mortals, but the principles behind this formidable record have been enough to provoke and inspire generations around the world. As Paul Lafargue proclaimed long ago: Long live the Right to be Lazy!

*After following a process as easy as ABC, the designer can now become a recliner