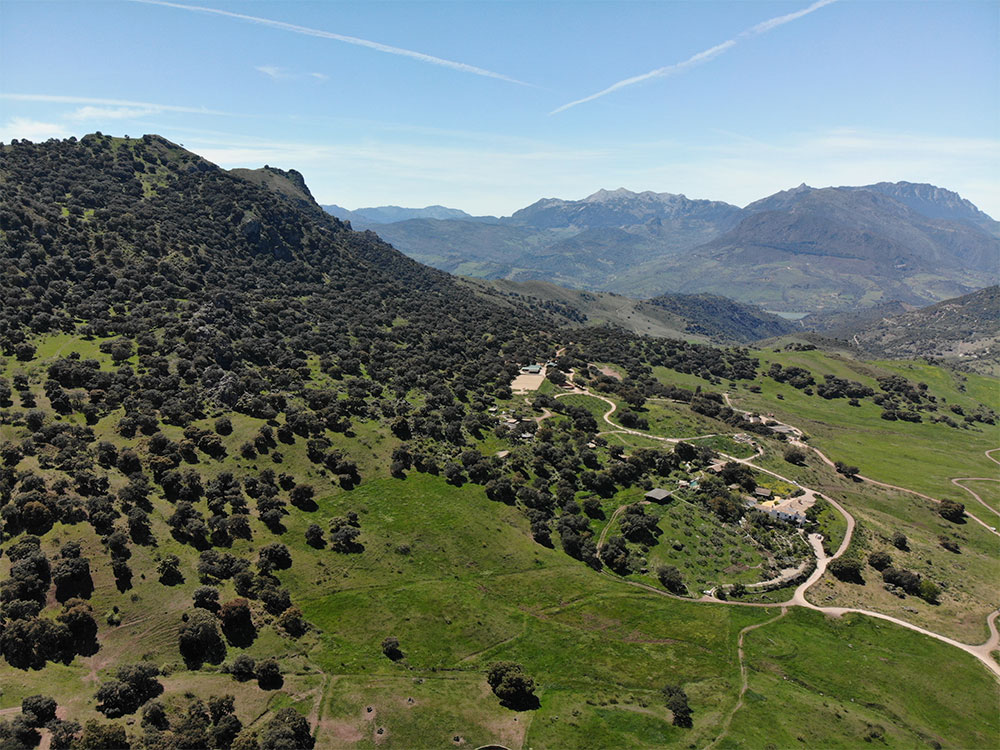 In this, the first of a series celebrating the Iberian dehesa as a model of sustainable agroforestry, we examine the origins and complex ecological inter-relations of this remarkable landscape.

Sustainable has become a fashionable buzzword over the last few decades, especially in regards to agriculture. Like many trendy phrases, the concept remains somewhat vague and overused. What exactly is sustainable? Rather than get bogged down in a welter of contradictory definitions, let us consider a single simple real-world criteria: sustainable is what has sustained itself successfully for a significant period of time.

On the steep upland slopes of La Donaira you can witness one of the few remaining examples in the world today of truly sustainable agriculture practiced on a large scale – the Mediterranean open-canopy woodland known as dehesa in Spanish and montado in Portuguese.  For agriculture, which only has a 10 000 year history, during which time most farming systems around the world have repeatedly transformed lush landscapes into deserts within the space of a few hundred years, the dehesa has proven sustainable at a truly impressive scale: the thinning out of indigenous closed canopy oak and pine forest and the proliferation of grape vines, which marked the first anthropic action in the establishment this system, has been dated back 6000 years. Since then, the landscapes of the region have been under continuous human occupation and development, during which time the ecology and agricultural productivity have continued to thrive, generation after generation: undoubtedly one of the longest-lasting systems of farming yet documented.

Using pollen diagrams, charcoal fragment analysis, radiocarbon dating of the cores and modern pollen rain to establish analogy between fossil data and dominant vegetation-types, scientists have been able to define and describe six major phases of evolution: ‘the simple prehistoric dehesa established in Phase I, and developed in Phase II, is followed by a millenium of deforestation (Phase III), after which a more developed dehesa succeeds in the early Iberian period, to last throughout the Roman, Visigoth, Arab and Medieval periods (Phase IV). In the early modern period, pine and oak/ash forests characterise Phase V and VI’.

We lack any exact official figure of the extension of the dehesa, as the term itself is not consistently defined in statistical records, but estimates vary between 3 to 6 million hectares throughout southern Iberia.

Etymologically, dehesa means “defended, fenced or protected”. There is some evidence which shows the use of the word dehesa since the early Middle Ages in the old Spanish code (the 7th century Visigoth Fuero Juzgo, a law protecting fields against free grazing).

Ecologists and foresters understand the name as describing a park-like landscape, with a sparse tree layer composed of oak trees (usually holm oak and cork oak), located in the south-western Iberian Peninsula, that provides browsing land for horses and cattle, grazing for sheep and goats, acorns for pigs, as well as some forest income from natural cork, mushrooms, useful plants, wood for fuel and space for bee-keeping. Finally, cereal crops can be yielded between the trees. In short, the dehesa is a known reference model of an agroforestry or sustainable agrosilvopastoral (combination of field crops, trees and animals) system in which ‘man-made’ landscapes are modelled on natural ones as managed as a kind of ´substitute wilderness´. The trees (primarily cork and holm oaks, but also including other indigenous species such as pine, ash, strawberry tree, juniper, carob, portuguese and pyrenean oak, wild olive, and chesnut, to various degrees) are viewed as an integrated part of the system, and as a result are planted, managed, and regularly pruned.

Although less celebrated, a consideration of the social and historical context is particularly interesting. During the reconquest of Spain, the fencing of pastures – exclosures – functioned to protect an extensive and complex system communal land tenure, as opposed to the role that fencing commonly played elsewhere – enclosures – to privatise the commons.

Trees were often owned and managed by people who did not own the land on which they grew, private rights to a field of crops were limited to the period between planting and harvest, and the fruits of the forrest (mushrooms, honey, firewood, building and craft materials, wild game, wild herbs and vegetables) provided a communal source of sustenance and income to villagers and travellers alike. In short, the dehesa “encouraged almost the entire territory of a village to become a continuous commons” with an intense diversity of yields, managers and beneficiaries.

However, like many other admirable traditions, the future of the dehesa is uncertain, despite its many advantages. Immense changes to the socioeconomic structure of the Iberian peninsula over the last decades have led to a massive exodus in the rural population, as well a devastating devaluation in the value of agricultural labour and its products. According to current estimates, these systems now generate an economic deficit rather than a perennial source of sustenance for entire communities. The prices of the products are similar to those of 30 years ago, and landowners face significant losses.

In forthcoming articles, we will continue to examine the past, present and future of the dehesa, exploring the hypothesis that addressing local problems holistically is also the key to discovering global solutions.