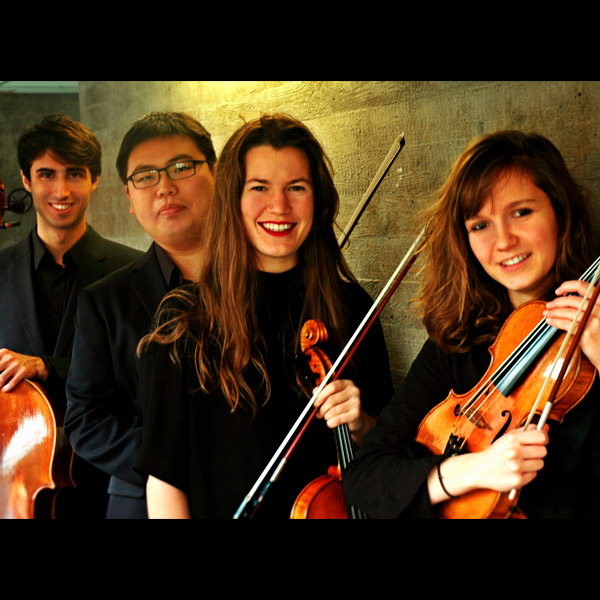 La Donaira’s monthly Salon Sessions are a fantastic opportunity to enjoy world-class music in intimate surroundings. Featuring two violins, viola and cello, the Atis String Quartet was founded in 2017 to bring together four young, outstanding chamber music players studying at the Cologne University of Music (Hochschule für Musik und Tanz Köln) in a sweet blend of instruments and nationalities. Individually, each of the star musicians has belonged to other renowned European ensembles and performed widely as soloists.
The one thing that’s clear is that if you want a glittering career as a musician, start early!

Juliette Leroux (violin) started playing aged four and was accepted into the National Superior Conservatory of Lyon at 16. Her performances as a soloist include Mozart’s Violin Concerto in A Major with the orchestra of Montmorency, but her passion for chamber music has seen her collaborate with many well-known musicians including Garett Lube, Michel Moragues, David Guerrier and Marie Joseph Jude.
Chen-Hung Tsai (violin) was born in Taiwan in 1995 and started learning the violin aged seven. As a member of the Asian Youth Orchestra he played in Japan, China, Taiwan, Hong- Kong, Vietnam and Singapore with renowned cellist Steven Isserlis, and is currently a member of the Sinfonietta Köln and the Junge Köln Philharmonie Kammerorchester. Last year he won the violin audition for the Junge Deutsche Philharmonie. Don’t knock into him: he plays a one-hundred-year-old violin by Giovanni Cavani on generous loan from the Chi-Mei Museum Foundation in Taiwan!
Sophie Rasmussen (viola) began studying the viola aged seven in Auxerre, France, and has played in several youth orchestras including the French-German Youth Orchestra, the French Youth Orchestra and the French orchestra Les Siècles. She is a founder member of the Atis Quartet, plays with several chamber orchestras in Germany, and also explores contemporary music with the Ensemble Musik Fabrik.
Josep Castanyer Alonso (cello) was born in Barcelona and started learning the cello aged six. At 16, he was one of the youngest students to be accepted into the Cologne University of Music. Like the rest of the quartet, Josep has studied under some of the world’s top professors in the field and a seasoned performer.

Tickets are €35 and include food, drinks and shuttle transport from La Posada (Calle La Fuentes, 49), El Gastor. Tickets can be paid for at La Posada on the day, but owing to limited availability, should be booked in advance.